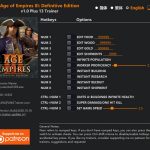 NOTES
“Infinite Population” takes effect when population number changes, the population number will reset to 0, so you can recruit as many units as you want.
“Worker Proficiency” will multiply the number of resources workers gather, and their building speed, research speed, etc.
“Units & Buildings Infinite Health” takes effect when your units or buildings take damage, their health will reset to max.

Status
+13 v1.0
This content was uploaded by website visitors. If you notice any mistake, please let us know.