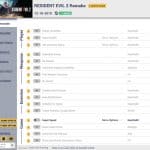 Notes:
As always, save OFTEN! Use options as directed! Some events in the game are scripted and cannot be avoided!

Player Invincible:
Toggle on and most things cannot kill you.

Super Health:
Press this to set your health to the value shown in the trainer. This is like an instant heal.

Unlimited Ammo:
Toggle on and most weapons and grenades that are equipped are unlimited. When you draw your weapon and aim, it will reset.

No Reload:
Toggle on and most weapons when fired will not need to be reloaded.

Set Inventory Space:
Press this to set your inventory space to the value shown in the trainer. The max appears to be 20.

Zombies Don’t Attack:
Toggle on and most enemies, including zombies, cannot attack you. Toggle off when not needed. This option may freeze the time in the game or freeze some scripts, so toggle back off when not needed. If enemies seem stuck or othewise are not acting properly or erratically, use an older save, or toggle this back on and off after a save and attempt to get a new enemy to attack, which will reset the scripts in most cases.

Easy Kill Enemies:
Toggle this on and many enemies will die very quickly. The trainer also turns on Player Invincible option automatically, to prevent you from being killed by the extreme damage.

Invisible To Tyrant:
SPOILER! There is an enemy in the game that relentlessly pursues the player throughout the house. This option will make it such that you can explore and progress without the Tyrant attacking you. Please note that eventually, it is scripted that you must be attacked later in the game, so the trainer will not prevent that, and the game requires that to happen to progress the story. However, until that portion of the game, this option is priceless.

To use this, toggle the option on, make sure EASY KILLS is on, then shoot the Tyrant when it approaches to send him to a knee. If this option is on, when he gets back up, he will avoid you. NOTE that the Tyrant is in a super state, and cannot see you but will also likely not be killable! Use the other TYRANT option if you wish him to be able to just stay incapacitated at one spot.

Reset Demo Clock:
If you are using the trainer with the demo, this will reset the demo clock.

Unlimited Ink Ribbons:
Toggle on and the trainer will attempt to give you unlimited ribbons.

Unlimited Weapon Durability:
Toggle on and many weapons and knives have unlimited durability.

Reset Game Duration Clock:
Toggle on while playing the game and it resets the time that you’ve been playing the game to 0. Toggle back off when you see it has reset. You can see your current time when you press ESC.

Tyrant Remains Incapacitated:
An alternate method to disable the Tyrant. Toggle on Easy Kill Enemies. Then shoot the Tyrant when he arrives, he will go down to one knee, then toggle this on and the Tyrant remains in that spot. Best to use this from fresh load when the Tyrant arrives if you haven’t used Invisible to Tyrant.

Reset Number of Saves:
Toggle on, then SAVE a game and the total is set to zero. Toggle back off when done.

Reset Total Number of Steps:
Toggle on then walk around a bit, then the total is set to zero. Toggle back off when done.

Fast Weapon Accuracy:
Toggle on and many ballistic weapons the aiming reticle instantly is at maximum accuracy.

No Recoil:
Toggle on and many weapons have less or no recoil.

Reset and Freeze Countdown Timer:
Some missions, like Sherry’s Segment, require you complete in a certain time to earn the achievement trophy, or there is a shown timer in some sequences. Toggle this on to try and lock the timer.

Reset Number of Times Item Box Used:
Toggle on while playing the character, then press ESC to open the menu, then click Records, then scroll down to Minimalist category and the value is reset. Toggle back off.

Reset Number of Times Recovery Used:
Toggle on while playing the character, then press ESC to open the menu, then click Records, then scroll down to Frugalist category and the value is reset. Toggle back off.

Temporary Unlock All Episodes:
Toggle this on at the main menu, then click Story, then you will see the 2nd Run is available. Also, you can now go back to main menu and all of the Extra Modes are available.

Unlock All Trophies Episodes Content:
WARNING! Once you do this, the content is unlocked and this cannot be reversed. This is 100% effective in that it will give you credit for ALL trophies, and it will UNLOCK EVERYTHING in the game, including models, costumes, modes, episodes, everything. So if you want to do this to avoid having to play the game legitimately to access the content, then toggle on while at main menu, then click Bonuses, then click Records and you will see the prompts that everything is unlocking. If you want to earn these trophies legitimately but want to play the other episodes, then use the Temporary Unlock All Episodes option instead.

Status
+23 (FULL GAME 12.18.2019)
This content was uploaded by website visitors. If you notice any mistake, please let us know.