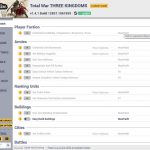 Notes:
MAKE SURE TO NOT PRESS F1 TO ACTIVATE THE TRAINER UNTIL YOU ARE AT THE MAIN MENU (this is where you can click NEW or LOAD or CONTINUE)! THIS IS ESPECIALLY TRUE FOR ALTERNATE RELEASE VERSIONS OF THE GAME! If you have AOB error when activating, wait a few seconds and try again.

For Ranking Unit Stats options, select a general or high ranking unit, then click to open it’s panel to show the values for that unit and the editor will fill in. Modify the values, then press TAB to lock them in.

Unlimited Credibility / Population / Reservers / Food:
Toggle on and the values remain high. May work with all factions in the current game setting, including AI. Do not use if this is a worry for you.

Unlimited Unit Movement:
Toggle on and your units can travel indefinitely. Due to the way this option works, you can move quite a long distance, but also may affect framerate as the game is trying to expose everything for that distance. Set the value in the trainer lower if you wish to have higher framerate while this is active.

Set Traits Value:
Open the panel where you can see the traits for your high ranking unit (things such as EXPERTISE and AUTHORITY), toggle this option on then mouse over the traits you wish to affect and the value is changed. You can set the CORE value written by the trainer from within the trainer. Probably best to leave this OFF, open up the general you want to affect and make sure they are the only one showing, then toggle on and move over the bars, then toggle back off.

One Turn Building Construction:
Toggle on and when you start construction, it only takes one turn.

Easy Build Buildings:
Toggle on and you can put buildings into the queue, even if you do not have the correct money. If you need specific Reforms or other pre-requisites, this likely won’t work.

Set Public Order:
Toggle on then click on a city to see it’s value and this will set it to the value you can modify in the trainer.

Set Military Supplies:
Toggle on then click an army to set it’s supplies to the value you can set in the trainer.

One Turn Reforms:
Toggle on and when you select a new reform, you will see that the new reform counter is only 1 turn instead of 5.

Repopulate And Fill Armies:
Toggle on then click on a unit and it will refill the units that were lost or replace units to the maximum value.

Instant Reset Battle Skill Cooldowns:
Toggle on and while this is on, many battle skills when activated will reset quickly.

Set High Morale:
Toggle this on and then select units in the battle and you will set their morale to a high value.

Set No Morale:
Toggle this on and then select units in the battle and you will set their morale to depleted.

Invincible Army in Battle:
Toggle this on, and while it’s on, any units you select will then be immune to damage in battle. Best use of this is before you click START, and to toggle it on, then click on each army card or unit, then toggle back off, then start the battle.

Game Speed:
Toggle on to speed up the game, allowing battles to finish faster and etc.

Easy Negotiations:
Toggle on and while this is active most negotiations go through and are successful.

Unlimited Battle Ammo:
Toggle on and many units that use ammunition have unlimited use.

Character Loyalty / Satisfaction:
Toggle on and access the current loyalty of the units you can select and it will change. Leave on to keep high.

Freeze Date / Extend Lives:
Toggle on and as the game progresses in turns, the actual date does not. May affect date driven scripts or events. This can be used to extend the life of dynasties and units.

Easy Unlock Yellow Turban Reforms:
Toggle on and when you enter the Reforms screen, you will see that all the Reforms are available to unlock. This option is intended for Yellow Turban only. May work in other factions, but is not tested for them and may cause issues or crashes. Toggle back off when done.

Instant Complete Yellow Turban Reforms:
Toggle on and when you select a Reform to Research or Issue, it completes instantly, unlocking or adding the items immediately, rather than having to wait a turn. This option is intended for Yellow Turban faction only, but may work for other factions. However, it is not intended for other factions and may causes issues or crashes if used for them. Toggle back off when done.

Set Character Full Faction Satisfaction:
Toggle on then access the unit from the Army, then mouse over the Faction Satisfaction icon in the Unit card on the left side of the screen to display the satisfaction list and traits. The trainer will try to increase them such that the character is fully satisfied.